Isa Marrs- In Her Own Words 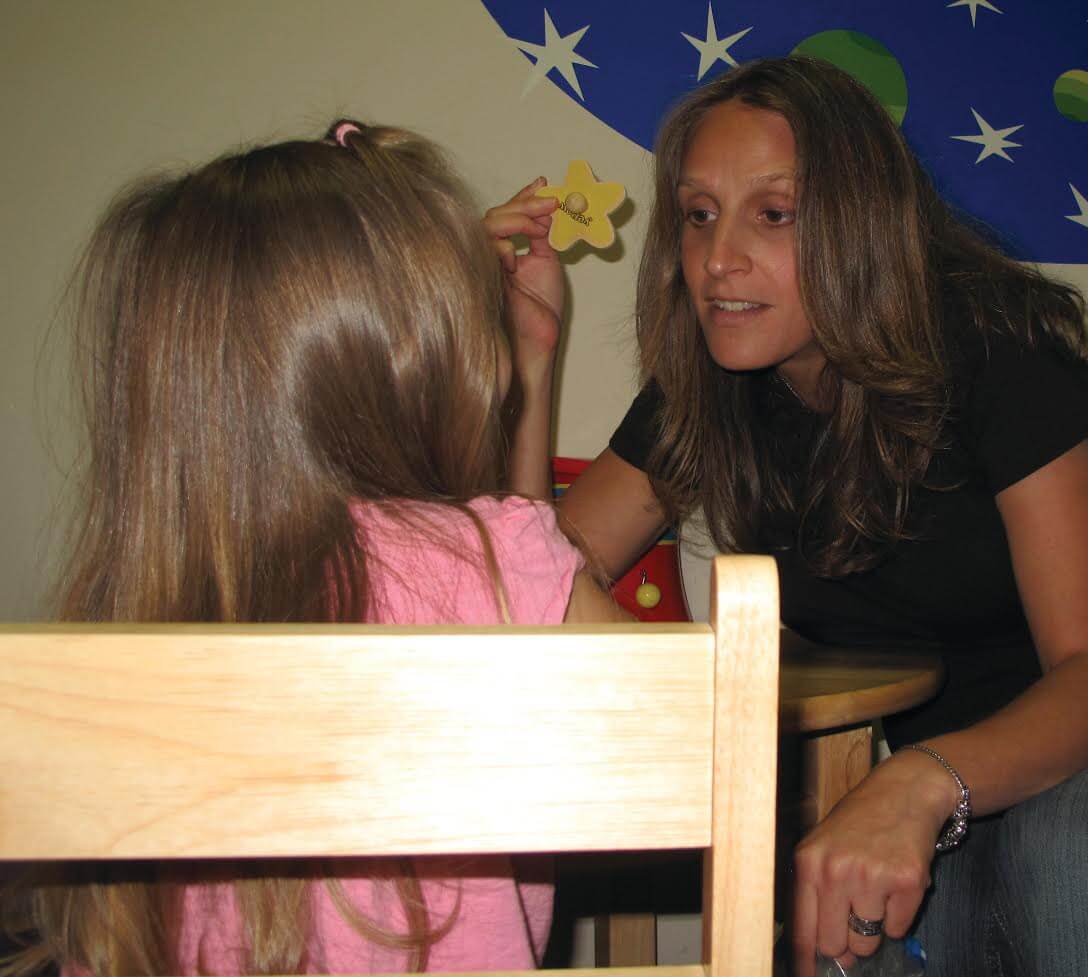 Over the years as a speech language pathologist I’ve worked in three states, with a world renowned expert and finally in my own private practice. I am often asked “How did you get into this field”?

The story behind this is interesting and unique; so, I thought I’d share that, along with my history here.

Growing up I always knew I wanted to care for things. Whether it was my dolls, my assortment of pets or my baby brother, I was always caring for something, or someone.

Then One Summer My Future Found Me

My older sister had taken a summer job at Jawanio in New City, NY as a teacher’s aide for a class of 3-5year olds with special needs. My sister was eighteen and perfect for the job. She was ready to start, but at the last minute she found a different job that interested her more. So she decided to turn Jawanio down.

My mother suggested that my sister call Jawanio and tell them that she decided to take another job, but that she had a little sister that would be perfect for the teacher’s aide position.

They were hesitant at first since I was only fifteen. That was several years younger than they usually hired. However, they agreed to interview me and I got the job.

Always Remember That Every Child Is Someone’s Baby

Before my first day my mother said something to me that I will never forget. She said, “no matter how severe the disability a child might have, always remember that every child is someone’s baby”.

I took that statement with me and have kept it in my heart at all times.

For the next few summers I worked at Jawanio. It was there, with my mother’s words in mind, my passion for working with children with special needs began. It is the first time I watched a Speech Language Pathologist teach children the power of communication. And I decided that I wanted to do the same thing one day. (I had been on the receiving end of speech therapy, when I was five, for a lisp.)

It’s Off To College

After graduating high school I moved to Ithaca, New York where I attended Ithaca College, earned my Bachelor’s degree as a Teacher of the Speech and Hearing Handicapped and began working in the field of early intervention providing speech and language therapy to children.

From there I moved to New York City where I worked at the Herbert G. Birch Early Childhood Center. I provided speech and language therapy to children ages 5-7 with Autism and other related disorders. At this time I was trained in the use and selection of augmentative communication devices, PECS, TEACHH and also began learning about oral-motor and feeding disorders in children.

I Knew I Could Do Better

Even though I could provide speech therapy I was still just a Teacher of the Speech and Hearing Handicapped. I knew if I wanted to really make a difference in the children’s lives I needed to become a board certified Speech Language Pathologist. That meant I had to go to graduate school.

I chose New Mexico State University (NMSU) for two reasons. The first was because of its strong focus on Augmentative Alternative Communication.

The second reason was because of Professor Dr. Sheila Stuart who directed an AAC evaluation team in which Graduate Students were trained in and provided evaluations for the community.

I knew this would give me experience that I would not be able to get anywhere else.

Undaunted by the 2000 mile commute to the Southwestern United States, and with plans to remain in my position at Birch while simultaneously pursuing my Master’s Degree in Communication Disorders, I enrolled in the “Summers Only” program at NMSU.

I remember how shocked I was when I stepped of the airplane in El Paso Texas. I had never felt such heat or seen such a desolate landscape. It was like moving to a different country. Everyone and everything around me was different from what I was accustomed.

That first summer was very difficult for me. Fortunately the demands of graduate school kept me busy.

The second summer was a bit easier. And at the end of it I made the decision to move to New Mexico full time. That decision allowed me to better meet the demands of the graduate program, the AAC evaluation team and to further immerse myself in the uniquely challenging population. (It also didn’t hurt that I met the man who would later become my husband).

After being awarded my Master’s Degree I remained in New Mexico where I continued working in Early Intervention, furthered my training in pediatric oral-motor, feeding disorders and received my Certificate of Clinical Competency from the American Speech and Hearing Association (ASHA).

I Saw Things Most Therapists Only Read About In Text Books

Many of the areas I worked in were extremely impoverished, and there was both drug use and violence in many of the households I visited.   I will never forget the horrors of Shaken Baby Syndrome, neglect, and even death.  While it was heartbreaking working with these children it was a very rewarding experience when I was able to make a difference.

Even though my work was rewarding I still missed home. My family has always been very important to me and I rarely got to see them while I was in New Mexico. So we made the decision to move back to New York.

We settled in Westchester County in 1999. I then continued working with pediatrics through the Westchester County Early Intervention program. I also received further intensive training in multiple therapy techniques including PROMPT and Links to Language.

That’s When I Was Discovered

It was during this time that I began consulting with Etoile LeBlanc, the world renowned expert in the area of craniofacial speech disorders. Being impressed with my capabilities Etoile invited me to begin seeing children in her practice. I accepted the offer and began seeing children at the Speech Science Centre where I specialized in structurally based feeding and articulation disorders.

This experience allowed me to gain further expertise working with children who have cleft-lip, cleft-palate and velopharyngeal insufficiency.

Then in late 2003, Etoile decided to take time off to spend with her family and I decided to start the private practice that would become Isa Marrs Speech Language Pathology, P.C.

All By Myself… Sort Of

Even though I had a lot of experience, a growing reputation and a supportive husband it was scary to step out into private practice. However, by this time I had learned that I could have a bigger impact on children’s lives by providing private therapy.  That was the only way services could truly be tailored to the needs of each child. I also knew it would give me the ability to train other therapists so that they could become more effective in treating children.

So I knew that was what I had to do.

Our first office was an old (slightly smelly) little walk-up just off of downtown Valhalla, NY. Despite the shortcomings of the space the families came for the therapy.

Then in 2006, while pregnant with my first child, we decided to move our offices to Briarcliff Manor.  As you can imagine the thought of moving while pregnant was very unappealing.

We made the decision in May. Maya was due in August, but we still had to oversee the construction starting in July and then move into the new office during October.

On top of that, I often wondered and feared that I would lose my passion to care for others when I had my own baby at home to take care of. Luckily that was not the case. I feel more devoted as I realize the excitement of each developmental step Maya takes. And I now have even more empathy for the families I work with and drive to help their children.

What looked like a terrifying step has turned into yet another wonderfully exciting leap on my journey. That October we started our monthly newsletter and launched the Where I Can Be Me Social Skills program. Since that time we have have grown a great deal. We have more therapists and more programs.

We also added our son Aaron in 2010. That is when I got to experience what it is like to need help for a child. He had Tortacalous (crooked neck) and needed physical therapy. Even with all my years in this field it was still a terrifying experience. It was incredibly difficult to trust someone with my baby. Thankfully we noticed it early and sought help. Now he is a happy and healthy little boy with no recollection of ever needing therapy.

Why I’m the Luckiest Person In the World

I consider myself very fortunate to be able to work with so many children, some that I have known since they were brought home from the hospital.

Some of the families I see drive as much as an hour each way multiple times a week to come to my office. I can’t tell you how flattering that is.  It also keeps me pushing to make sure that each minute of therapy is the very best!

It is incredibly rewarding to be a part of so many families’ lives.

There are not many people who can truly say they love what they do. I am proud to say that I do. Each and every child has a place in my heart… and I am happy to say that there is always room for more!

I hope that you enjoyed my story and I hope that this website gives you the answers you’re looking for.

Speak to you soon, Isa