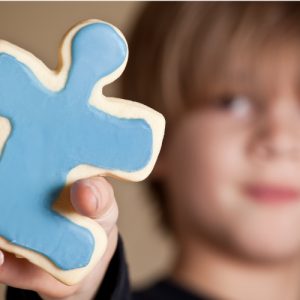 With so much information out there in recent years about autism I thought it would be beneficial to get back to the basics.

Much of the information in today’s news usually relates to causes, treatments, and statistics.  I want to talk more about how autism affects speech and language and often eating in individuals who have an autism spectrum disorder.

While many of you reading this article are dealing with autism first hand, many of you are not and only know what you have read.

Autism and Language Skills
First let’s talk about language.  Language can be divided into 2 main parts: expressive and receptive.

One exception to this is found in children with Aspergers.

These children will usually have advanced language skills both expressive and receptive; however their pragmatic language skills are impacted to a degree which makes understanding the world around them difficult.

Pragmatic Language and Autism
All children on the autistic spectrum will have deficits in pragmatic language to some degree.

Pragmatic language refers to the social use of language.  The ability to use the language skills you have to interact with the world around you.

These deficits may be subtle to an outside observer but can be profound to a child experiencing them.

Social skills deficits are very complex and they are usually mistreated and misunderstood.  They are also a very emotional issue to all involved.

Imagine spending years watching your child struggle to learn to communicate and once he does you realize he still can’t use these skills to make friends.

Autism and Speech Skills
Another area that is not part of autism but quite often coexists is speech disorders.

Childhood Apraxia of Speech is a severe motor speech disorder that is believed by some to occur in higher percentage of children on the autistic spectrum than in the general population.  This speech disorder makes it even more difficult for these children to learn to communicate.  Therapy for a severe speech disorder should be intensive and is often not very exciting.

This being said children on the autism spectrum who have other behavioral challenges will have a harder time making progress than a child who does not have an autism spectrum disorder.  Minor articulation errors such as lisps will often get overlooked as they are not priorities when looking at the child as a whole.

Autism and Eating
Eating is another area that is very often impacted with a child on the autistic spectrum.

While it is not a speech or language issue it is often treated by a speech language pathologist. It is one of my areas of specialty; so, I thought I would discuss it as well.

Children on the autistic spectrum often fall into the category of resistant or problem eaters.

The most important distinction between a picky eater and a resistant eater is severity.  A child who is a resistant eater could put his life at risk by refusing to eat or drink when pushed in the wrong direction by well meaning parents or uninformed therapists.

There is a lot of information out there on picky eating and you will rarely read anything about a child starving himself if not treated properly.  This is putting children’s lives at risk.  While a typically developing child may not starve himself, a resistant eater might.

The Central Concern of Autism
If you are a parent of a child with autism or a professional working with these children I am sure you realize the importance of getting the right and the best speech language pathologist you can find.

While these children definitely have other significant issues that need to be addressed by other experts, we can all agree that communication is the central concern in autism spectrum disorders.

I have worked with hundreds of children on the autistic spectrum over the years and as a whole they are the most challenging to work with but in turn are the most rewarding.