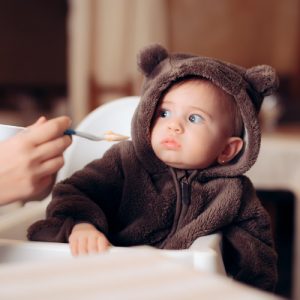 Many parents struggle with picky eaters. How we handle this picky phase can make a difference in the future of our children’s eating and health.

Some children have an innate disposition to being pickier and more neophobic (frightened of new food) than other children. This stage peaks at around eighteen months and typically subsides if handled properly.

Both the child’s personality and the parent’s response can make this stage better or worse. It is thought by some that toddlers become fearful of foods as a survival mechanism, as a way of preventing them from eating everything in sight and poisoning themselves.

Another Reason For Picky Eating

Lack of experience early on (first 12 months) with a variety of tastes and textures can also cause picky eating. Often this comes from parents who may be anxious and picky eaters themselves. Children model the eating habits of their parents and frequent caregivers such as nannies.

Lack of exposure to lumpy foods can also cause delayed oral motor skills such as difficulty moving food around in their mouths and chewing. This leads to more gagging and fear of foods.

Force Feeding Is Another Problem.

Parents who force feed create a power struggle around eating leading to a child’s inability to regulate their own hunger. Anxious children may lose their appetite.

Healthy children are able to regulate their own hunger and eat the right amount to grow. The amount eaten will vary from day to day. However, when looked at over a week and compared from week to week it should balance out.

It is a parent’s responsibility to offer healthy foods. However, healthy children need to have control over how much they eat. Children who eat small amounts could be offered 5 smaller meals each day opposed to 3 large meals.

As a feeding therapist I deal with these issues on a daily basis and have done so for several years. However as a parent it’s all new to me. I work hard to follow my own advice and it’s not always easy. However, logic needs to take precedent over my emotions.

I strive to give my child a variety of tastes and textures every day. Jason and I often eat something at the same time our daughter does to give her the feeling of “family meals”. We also encourage her to enjoy eating. I never prepare a second meal when she doesn’t seem to be enjoying the one I’m feeding her. I also continue to introduce less preferred foods, and I do not assume “she just doesn’t like them”.

It’s important to give children many chances to like new foods. Often parents will assume at the first refusal that their child doesn’t like a food and never will. Some parents may tell their child “you don’t like that” when the child wants to try the food again in the future. This encourages picky eating.

Instead you should model good eating habits yourself. Show your children how much you enjoy the food. It may take time but most likely your child will begin to eat it as well.

Later that day I sat down with her to play. I had a bowl of the apple sauce for myself. My daughter immediately began to grab at me and request a taste. She couldn’t get enough. It was the best thing she had ever tasted, and I had to refill the bowl! I’ve used this and other simple strategies to get her to eat all sorts of different foods. She’ll even eat salsa.

It is rewarding to see my strategies as a feeding therapist are also helping me as a mom.

Raising a happy and healthy eater can be a challenge, especially without help. And the wrong help can make matters worse. Early childhood eating habits are important because they have been linked to serious health problems such as obesity, anorexia and bulimia. If you have concerns about your child’s eating it is important that you don’t ignore them.

Note: Studies show that somewhere between 25% and 40% of all children and 80% of special needs children have feeding disorders. There are times when therapeutic and/or medical intervention for a feeding disorder is necessary. A thorough interview and  feeding evaluation can determine what is appropriate.

Posted in Feeding and Picky Eating