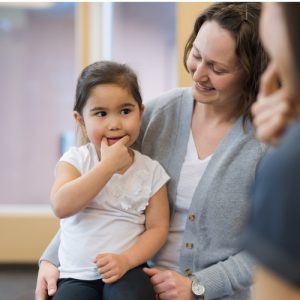 There have been several studies over the past few years that have shown that when evaluated by an expert in Childhood Apraxia of Speech roughly 75% of children with the diagnosis are found not to have the disorder. One study even reported that out of 53 children previously diagnosed or suspected of having Childhood Apraxia of Speech, only 7 did. So a full 87%, did not actually have the severe speech disorder.

Neurologists Should Not Diagnose Apraxia
It feels as if every time I turn around there is another non-verbal 2 year old getting this diagnosis from a well meaning Neurologist. There seems to be many Neurologists who will diagnose any child who has a normal neurological exam at age 2 and is not talking with Childhood Apraxia of Speech.

I am not blaming the Neurologists for this. Most of the time, they are put in this position by Speech Language Pathologists who don’t feel comfortable giving the diagnosis themselves.

Unfortunately diagnosing this severe speech disorder is not easy. In fact there is no one agreed upon assessment tool within the field to make the diagnosis. Because of this many Speech Language Pathologists do not feel as if it is their role to make this call when in fact it is.

While the person who makes the diagnosis may seem unimportant, it really is extremely important.

A neurologist can rule out any other neurological causes for a severe speech disorder; however they should not be asked to make the diagnosis of Childhood Apraxia of Speech. They are not experts in speech and language disorders, only Speech Language Pathologists are. Neurologists have plenty of other areas in which they are the experts; this is not one of them.

This scenario is contributing to the over-diagnosis of this disorder.

Age Of Diagnosis Also A Factor
Another factor contributing to this problem is the age of diagnosis. A child should be at least 3 before they can be accurately diagnosed. Prior to age 3 the disorder may be suspected, but it should not be diagnosed. A lot can change between the ages of two and three.

Childhood Apraxia of Speech is a speech disorder which involves motor planning deficits of volitional speech. Until a child makes an attempt to speak we have no idea what is going on. We can suspect motor planning is an issue due to some red flags we look for, however a diagnosis should not be made too early.

Important Red Flags
Some red flags in infants and toddlers include; little or no babbling, drooling and feeding difficulties, limited intonation, and words used and then lost.
While these characteristics are not enough to make a diagnosis they are reason to be concerned and take action. A child suspected to have Childhood Apraxia of Speech should be treated as though they have the disorder even without a diagnosis.

Just because there is over-diagnosis does not mean that therapy should be avoided. With any speech disorder the sooner therapy starts the better the outcome.

When a child has Childhood Apraxia of Speech he or she may need 3000 productions of a sound combination or word to learn a muscle memory for that combination. So I am a strong believer that the more therapy a child is able to get, and the sooner they get it, the better. I would add to that, that therapy must be fun and doable for everyone. If someone in the equation is miserable something must change.

Stop Searching and Take Action
So if you are a parent of a young child who is diagnosed with Childhood Apraxia of Speech and you are searching and searching for answers and opinions, stop now. Find yourself an excellent Speech Language Pathologist with the proper experience and start therapy immediately.

While finding answers is important, getting the right therapy for your child is a better use of your time.

Posted in Apraxia of Speech