The Struggle Over Dinner… Are You Picking The Right Battles? 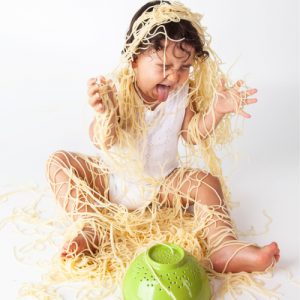 It is always important to constantly remind yourself to “pick your battles”. This saying relates to all areas of parenting and when working with children in therapy. However, feeding is an area where picking your battles really counts.

This phrase pops into my mind on a daily basis these days while I sit across from Maya and watch her eat.

The other day I handed her a jelly sandwich, she opened it and stuck both halves to her chest. And she was wearing a clean, new shirt. I wanted to get angry and stop her; however, I knew she would fight back. So I watched her pull the sandwich off her shirt, close it and begin to eat. I was glad I did not turn that one into a battle, but it wasn’t easy.

She also has decided that plates of food do not belong on her tray. She thinks they belong resting on her chest right under her chin. This can get very tricky at times. But I have figured out that if I move the tray as close to her body as possible the odds of spilling decrease as the plate now has something else to balance on, again, a good time to “pick your battles”.

Maya has always been an exceptionally messy eater. When she first began eating finger foods, I knew she was done because she would start stacking food on top of her head. Strange, but not worth a battle.

What Is Worth The Battle?

When it comes to health and safety I always pick the battle. One of the tips I talk about is having kids eat in their seat. Besides letting children know what to expect when they are in their seat and keeping your house from getting covered with food, children who eat while running around the house are at a greater risk for choking. This to me is worth a fight.

Another battle worth choosing is the elimination of juices and soft drinks. Did you know that fruit juices may claim they are “natural” or contain “100 percent real fruit juice” even if there’s only a tiny bit of real juice in their product? So offer water and only water between meals and get the juice out of the house.

However, juice should not become a battle at play dates or parties. These special occasions are better left battle free.

A third battle to pick is the short order cook battle. If you prepare eggs for breakfast and your child turns up his nose and demands pancakes do not cook a second meal! If you do this, you will be setting up a situation in which your child will demand certain meals and expect you to prepare them even if you have already cooked something else. However, this being said, you should not make a battle over whether or not your child actually eats the eggs. That is entirely up to him.

Now here’s the fun part. Try to show as little emotion as possible whether the eggs are eaten or not. Do not celebrate or nag. The eggs should be eaten because they taste good and because the child is hungry. Food should not be eaten to make you happy. When children are eating for reasons other than hunger or not eating for reasons other than being full, cues are missed and more serious eating disorders could develop.

One last battle I will mention this time is turning off the television while eating. Mealtimes should be social times. They are a time for you and your children to bond. Also, it is not fair to your child or children to leave them sitting alone and eating quietly. While older children can socialize with one another, younger children need adults to initiate socialization and to just keep them company.

I have seen several situations where a busy mom puts food on her toddler’s tray and then goes about her work around the house. This is like an adult going out to a restaurant alone. It’s just not fun. Take the time, sit with your children and even eat with your children. Make mealtimes fun!

So next time you are eating with your children, think carefully before you pick a battle. Ask yourself the following questions: Can you live with the behavior? Is it causing any real harm? Will there be a negative impact on future meals because of the behavior?

Think carefully, because when you pick a battle, any battle, it needs to be in your control to win. If you do not win the battle tonight it becomes the war tomorrow.

Posted in Tips For Parents